Marketplaces are not new. Istanbul’s magnificent “Grand Bazaar” dates back to 1461.

Today, the Grand Bazaar is a thriving complex, employing 26,000 people (more than twice the number of eBay employees!). The Bazaar has almost half a million visitors daily, and is said to be the world’s most successful tourist destination.

In it, more than 4,000 merchants over more than 47 thousand square meters offer a dizzying array of goods from gold bracelets to intricately woven carpets. 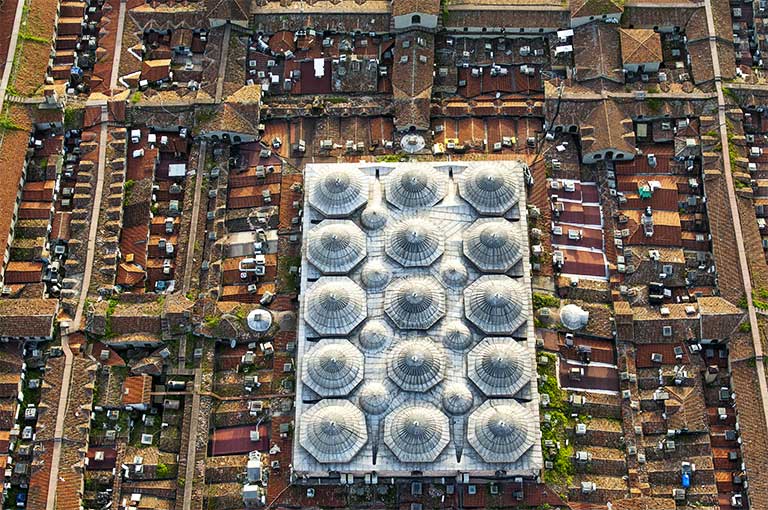 But is the Grand Bazaar organisation consistent with Launchworks Platform Rocket model?

Attract both sides to reach a critical mass

Initially erected by Sultan Mehmet II as a physical hub for trading textiles (a focused ignition strategy for the platform), this giant shopping mall quickly became a magnet for other types of trade. Slaves were traded nearby for years, then second hand goods, including a full section with old books. The introduction of different categories over time is quite similar to the growth trajectory of eBay (with the exception of slaves of course). Over time, these specialised trading hubs merged into an entire city quarter during the 17th century. The Grand Bazaar provided for centuries an unrivalled selection of goods in Europe and attracted merchants from all over the known world. The wealth of supply attracted many visitors and a critical mass was quickly reached… on both sides of the marketplace. In fact, no other market in the world did come close to the grand Bazaar for several centuries.

Finding the right kind of goods in a marketplace is often difficult, and a clear organisation is required for the matching of supply and demand to be efficient. What modern platforms do now with search algorithms and catalogues, the Grand Bazaar did through a thematic organisation with mandated locations for specific types of merchants. In fact, the location of given clusters of shops was mandated and part of the governance of the platform in order to ensure that customers could quickly find what they were looking for. The market initially had 67 roads each bearing the name of a particular type of goods (leather, gold, textile, etc.) to make it easier for people to find specific goods. The layout has changed a bit over the years, mainly due to earthquakes and fires, but the principle of clustering is still very much alive.

The original concept of the Bazaar involved sitting down with the merchants selling goods you were interested in.  Turkish coffee was graciously offered by merchants while their prospective clients would peruse through their goods. Even now, some merchants would keep this tradition and invite you in for a drink… This was meant to create trust and allow the parties to exchange relevant information and negotiate. Something marketplaces still do today via their messaging services.

While you may have lots of interactions with merchants (many of them trying to attract your attention, inviting you for an apple tea or Turkish coffee, etc.), only a few merchants are likely to manage the feat of getting you to open your wallet.

Yet these are exactly the kind of core transactions that the Bazaar seeks to maximise since they generate income for the ecosystem. You will need to establish some trust with the merchants you are planning to transact with and you’ll no doubt find that negotiating in Istanbul’s grand Bazaar is a unique experience!

Clearly the grand Bazaar couldn’t optimise itself in near real time in the same way as current digital platforms can. Yet it used every opportunity to improve itself over the years, especially when ‘acts of god’ forced significant renovations or changes. It is reported that the covered market gained more natural light after the 1698 renovations. It was also improved over time –and the location of certain types of goods optimised- after fires in 1943 and 1957 and after the earthquake of 1766.

Like other platforms, the Bazaar needs to provide security and trust to its participants… and it does. The gates are guarded day and night (guards patrol the inside of the market even when the gates are closed) and the level of security is very high. In fact, only a handful of significant theft cases has been reported in the entire history of the market. The perpetrators were almost always arrested… and often severely punished. This helped establish a respected global ‘umbrella’ brand that has benefited all the merchants associated with the Grand Bazaar to this day.

While digital platforms are able to scale at an unprecedented pace, it is interesting to see that the design of the business rules and governance principles that underpin centuries old marketplaces like the Grand Bazaar are very similar.

One comment on “Launchworks Platform Model in Istanbul’s Grand Bazaar”

Contact us today to see how we can help your organisation.

If you missed our chairman and co-founder @fred_montagnon's interview with @lreillier for @PlatformLeadrs, the replay is available NOW!

Great insights on the promise of #web3🚀

What needs to be done to solve the climate crisis?
👉 "A lot" says @jennschenker who chaired the panel on sustainable platforms. Find out how pioneers like @LucieBasch @windisch_p are scaling sustainable ecosystems to enable the circular economy👇
...https://hubs.la/Q01gGG6S0

Platform Leaders 4.0 was epic! Missed it? The full video of the event is available now👇
https://hubs.la/Q01gGDM40

What makes the circular economy attractive to investors? @martiescursell, investor and Managing Director of Bonsai Partners, will join us on June 7 to share his insights on investing in sustainable platforms such as @refurbed_com.
Register now ...👉https://hubs.la/Q01cqrHw0